Two local cable TV channels, also known as Government Access Channels are provided to the City of Chino Hills by Verizon and Time Warner Cable TV through a Cable Television Franchise Agreement. Both channels are operated by the Community Relations Division of the City of Chino Hills and are key to providing the community with information on all City events, and services exclusively. Chino Hills residents can watch the airing of the City Council meetings and can view the Community Bulletin Board on the following channels:

Also airing on City TV 3/41 is a taped delayed recording of all City Council Meetings. The Council meetings air on Time Warner Cable Channel 3 & Verizon Channel 41 daily, for a period of a week and a half beginning the Wednesday after a Tuesday night meeting.

There are three ways you can watch City Council Meeting coverage: 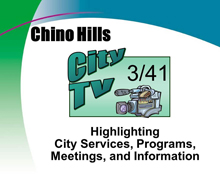